“Patience is bitter, but its fruit is sweet.”― Aristotle

"There is nothing permanent except change." —Heraclitus

WHY THE NEW NAME? When we were getting started, the name "Athena's Treasures" accurately described our purpose: To bring the Greek Jewelry treasures to the world. We were never completely sold on it though; that it lacked elegance was excusable, but that it lacked spirit was not. So we've finally come to rectify this in order to celebrate our fresh new outlook on life and business.

Athena was the goddess of wisdom and war. She is well known as the protector of Athens but was also the goddess of craftsmanship (how appropriate for us!).

Gaia, in Greek mythology, is the ancestral mother of all life—the original Mother Earth. She was the deity behind the Oracle and oaths sworn in her name were considered the most binding of all. Gaia was also worshipped as the “sender of gifts” (again, how appropriate for us!).

Most of all; the new name simply means progress. Our relationships with each other, our customers, and designers has grown stronger during the 5 years since Joanne and Peter first met, and it's simply time to show it with a new name!

Our goal is to represent, protect, and cultivate a small but important part of the world’s artistic heritage and culture. The manufacture of Greek Jewelry is one of the oldest industries on Earth. From its beginnings in 3,000 BC through today, despite hostile occupations by the Romans, Ottomans and Germans (to name a few), the Greeks have continued making jewelry … in an uninterrupted tradition of 5,000 years.

Now the greatest threat comes from luxury brands who mass produce products overseas.  But we know something they might not; that the underlying “brick and mortar” of a tradition like ours comes from love, hard work, and the desire to please the customer. So each piece is a celebration of individuality. Only once we know your size and stone options will we begin creating it & long after it has left our workshop it will remain a token of our heritage and mark time in an ancient list of other creations – each created by hand but given and held by the heart. 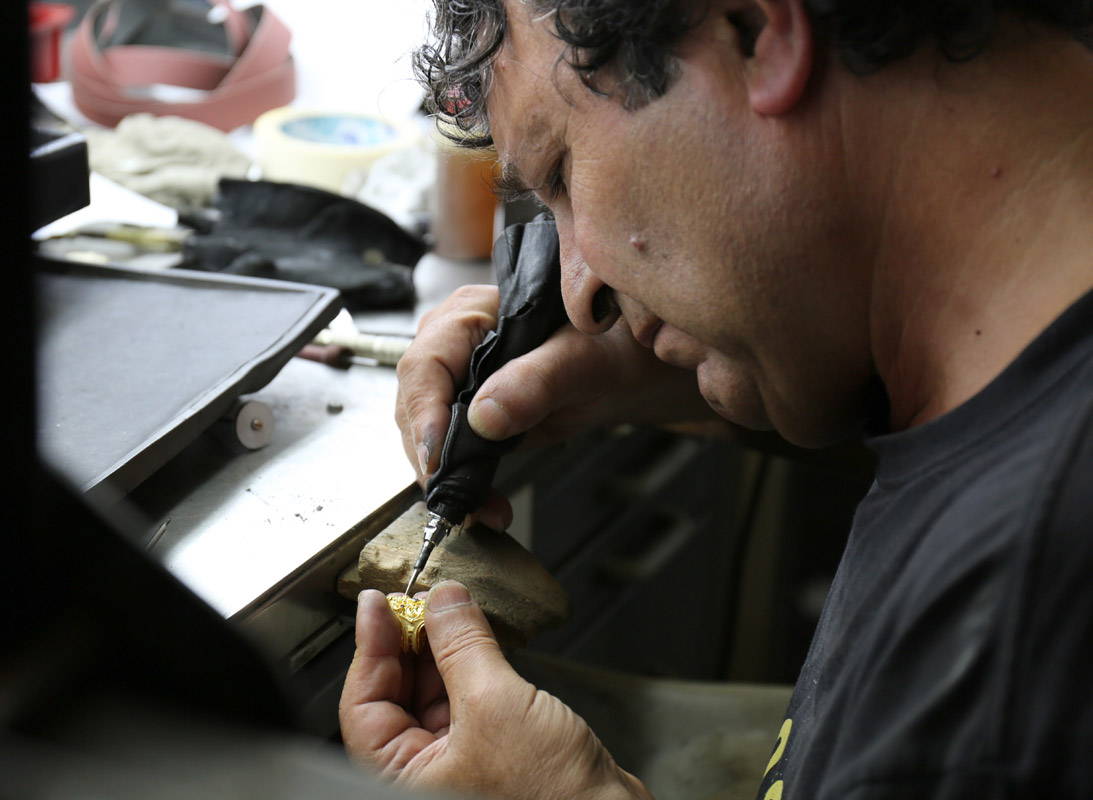 To achieve this goal, we've partnered with designers and workshops who are dedicated to a traditional hand-crafted Greek Jewelry process, and whose manufacturing happens entirely in Greece. We deal only with designers who understand the demands of the digital age, how to be responsive to tight timelines and understand the value of each and every customer.

Making the connection between designer and customer is the most gratifying part about running our business. Our designers remember your previous orders. Salutations cross oceans and borders, and before you know it Giorgo Damaskos is throwing an extra little gold flower into a design for somebody, or Spiros Gerochristo is telling us he wants to upgrade an order. We deal with small family businesses ... and that's how everyone gets treated; like family. 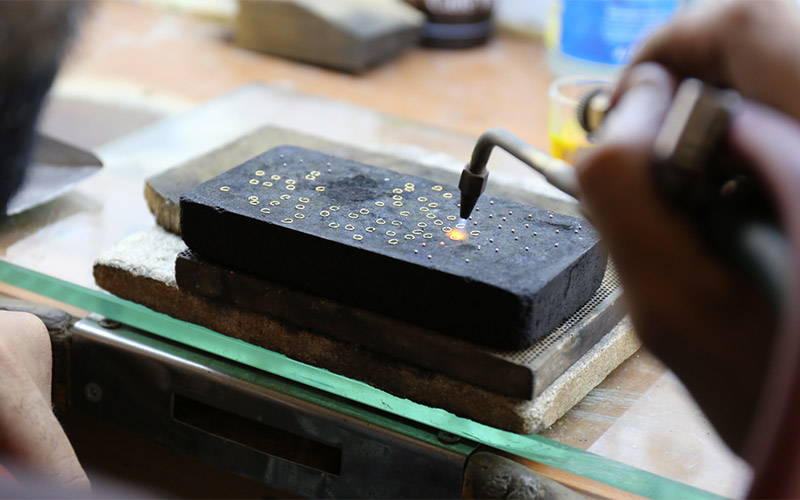 High-karat gold loops are fired in the beginning of the Granulation technique. The loops will form balls that will be placed individually onto the jewelry—A steady labor of love. 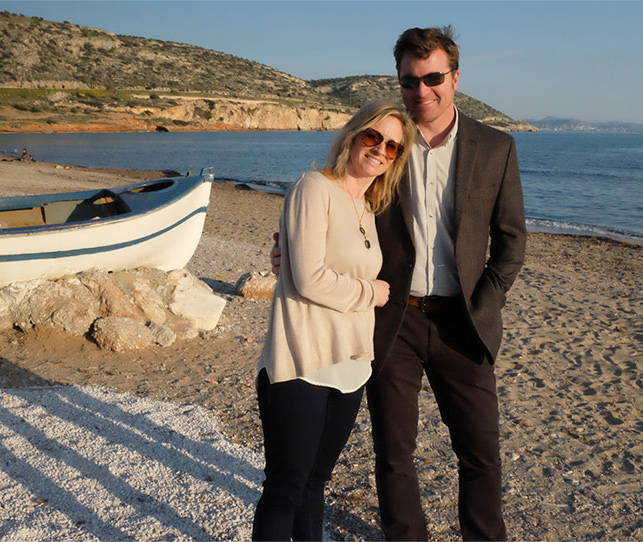 After surviving 9/11 Peter moved to Greece and discovered one of the world’s hidden treasures; the intricate art of Giorgio Damaskos, Spiros Gerochristo, Grigoris Evangelatos and many other jewelers. Over the past 15 years he has worked to bring worldwide recognition to their work with his inception of Athena's Treasures. He loves to personally interact with customers and collaborates with the craftsmen to ensure that each piece of jewelry is exactly what it should be; valued forever!

An established online development professional, photographer and professor at NYU, Joanne has used her talents to help expand Athena Gaia's presence on-line and increase the production value of our site. Her creative spirit enlightens the personality for the store, and she energizes the business by providing customers with a seamless experience through all forms of communication.

Joanne and Pete primarily operate Athena Gaia from New Jersey, but also spend a significant portion of their time in Greece with their designers.

A team of talented go-getters nurtures our Greek Jewelry business and makes everything possible. A special thank you to each and every one of them for their efforts. 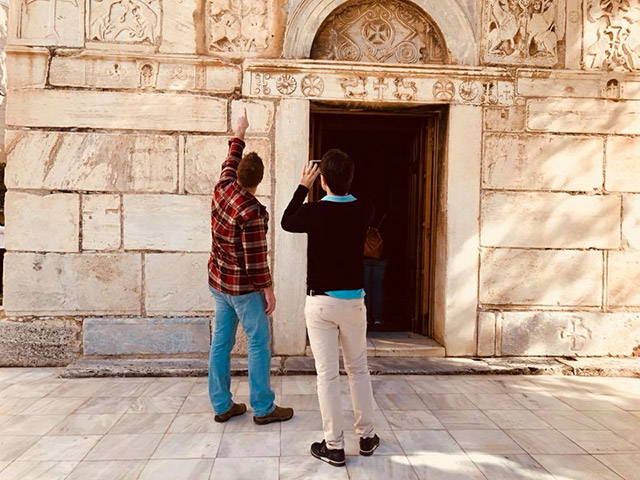 Peter and Håvard are preparing a video, this one showing how our artisans are inspired by ancient Greek architecture. They are at The Little Metropolis, formally the Church of St. Eleutherios (Άγιος Ελευθέριος) a Byzantine-era church located next to the Metropolitan Cathedral of Athens

Learn about the process of custom Greek Jewelry with Athena Gaia in this video featuring Founding Partner Pete Bradley. For this piece we modified our 18k Gold Diamond Block Chain Bracelet by Damaskos to accommodate 3 panels of hand painted Cloisonne Enamel on one side.

Learn about the process of custom Greek Jewelry with Athena Gaia in this video featuring Founding Partner Pete Bradley. For this piece we modified our 18k Gold Diamond Block Chain Bracelet by Damaskos to accommodate 3 panels of hand painted Cloisonne Enamel on one side.

Each jewelry piece we offer is handcrafted upon order, in the finest workshops in Greece. Our headquarters is in the United States.