The word "cross" comes from the Latin word "crux", a Roman torture device used for crucifixion. As a symbol, it has been used by cultures worldwide prior to and during its association with Christianity. Our focus is to highlight its many forms as a Christian symbol. 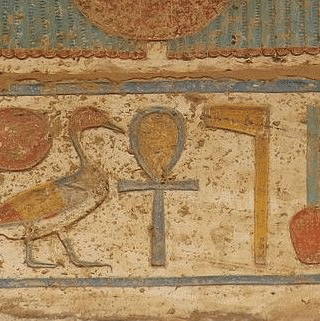 The Ankh is a cross shape with a loop (or a handle) at the top. It predates Christianity by  2000 years and represents the concept of "life".

For early Coptic Christians it was an easy adaptation in both meaning and form. The top becomes a full circle. The example shown features a woven pattern that together with a circle are features of Celtic crosses. The migration and adaptation of symbology are human constants across cultures and history. 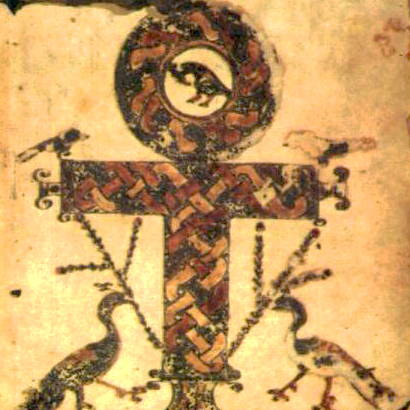 The Greek Cross is a simple cross with equal length arms.

Prior to its use as a Christian symbol it was used by Pythagoras of Samos, who we know best as a mathematician and astronomer. He also founded a mystic philosophical movement known as Pythagorism. Pythagoras spent his early years in Egypt where he came in contact with the ankh symbol and its deeper meanings. His adaptation of this powerful symbol may be attributed to his fascination with geometry as he opted for equal length arms to symbolize air, fire, water, and earth.

As a composition, the purpose was to signify the harmony of the universe. Oaths were often taken under the sign—as people might swear on a bible, or getting married under the cross to this day. 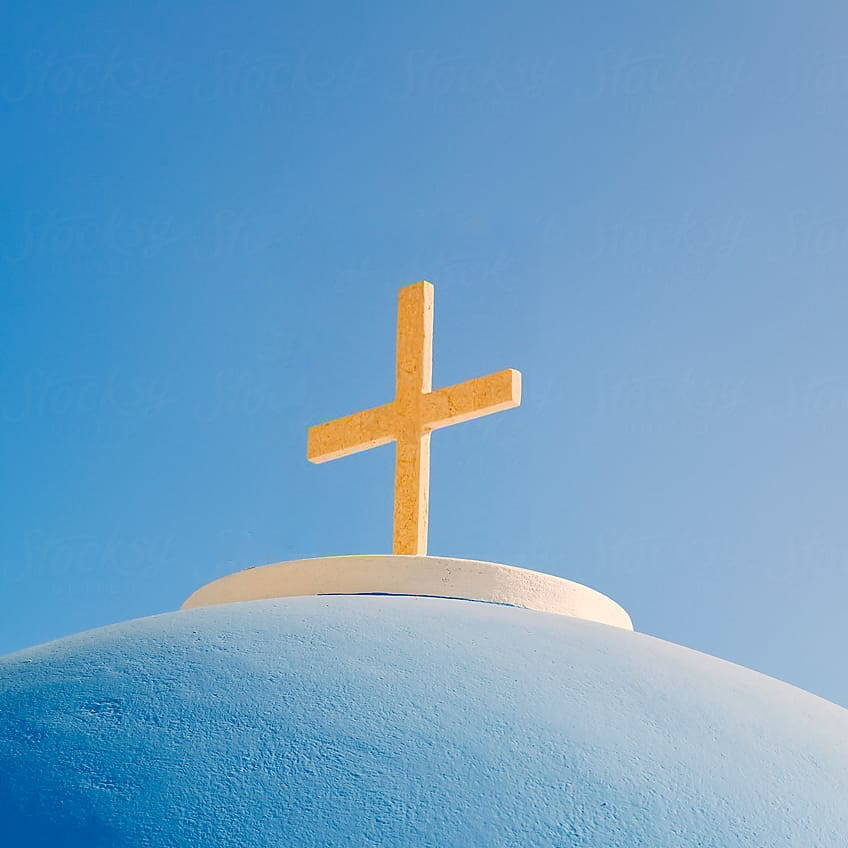 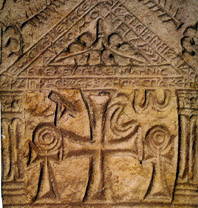 The Greek cross, unlike its Latin counterpart was not meant to symbolize the cross Jesus died on, but the church itself—spreading the gospel to the North, South, East, and West, as well as the four platonic elements. As such, its lineage to the Pythagorian cross, as well as the Egyptian Ankh becomes very clear.

An interesting take-away from this is an understanding of how symbols and their meanings adapt and migrate over time. Just as the Americans adopted the Greek architectural style for government buildings in an homage to the rule of Democracy and its origins, the early Christians in Greece adopted existing symbolism that had a social power and meaning of its own. It's an interesting way of channeling the existing energy of the masses to a slightly new cause.

The image shows evidence of continuity from the Ankh to a Greek cross (also note the Greek Alpha and Omega (lower case) symbols.

The symbol is simply the Greek letters chi (X) and rho (P) signifying the first two letters of the Greek word for Christ; "χριστός". This was among the very first signs adopted by early followers during a time where they were persecuted by the Romans.

In many cases you will also find the Greek letters for alpha and omega to the left and right of the cross. These are the first and last letters of the Greek alphabet and symbolize the beginning and end, or the inclusion of all things. The influence of the Greek philosopher Plato can be easily inferred from this, as several hundred years prior he used the letter "X" to explain the idea of a non-material connection between all living things—a concept which may have come from Pythagoras before him (see Greek Cross) and had widespread acceptance by the time of Jesus. 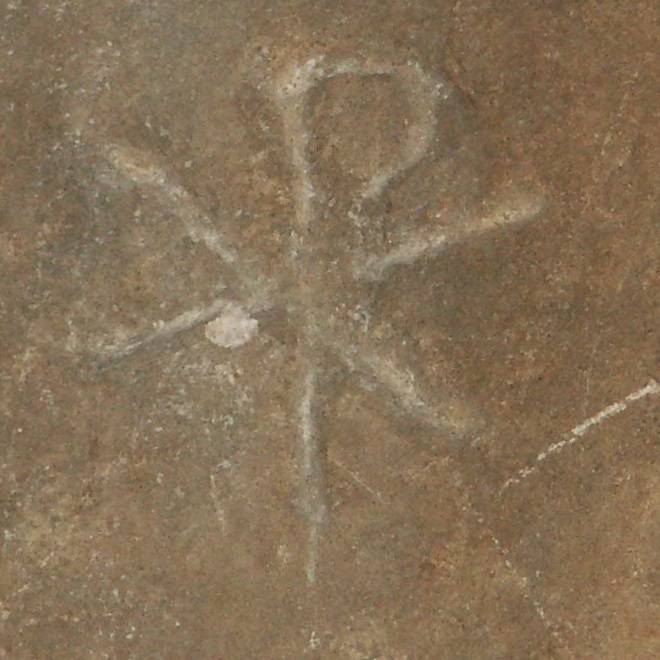 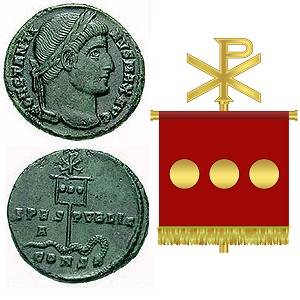 In 312AD, with the Roman Empire in civil war, a leader named Flavius Valerius Constantinus was heading into the battle of Milvian Bridge to decide control of the Empire. His troops were seasoned veterans of battles all over the Empire, but this time they were outnumbered two to one by their fellow Romans. Because they refused to loot and pillage nearby civilian towns, they were also perilously short of provisions.

On the eve of battle, a terrifying storm set in, destroying tents and scaring horses. The clouds finally parted to reveal the last rays of sunlight bursting through the heavens. The light illuminated the Chi-Rho symbol with a message saying "In Hoc Signo Vinces" ("with this sign comes victory"). The following morning, the Chi-Rho was mounted to the legion's standard and painted on every shield. They overcame the odds to win the battle of Milvian Bridge and the Roman Empire along with it. It was then that "Flavius Valerius Constantinus" became known as Konstantine the Great, and Christianity was legalized throughout the Empire.

The Cross most commonly associated with the Greek Orthodox Church has a long bottom stem and shorter length head and arm stems. The defining features of this form are the tips of the stems which have rounded protrusions in each of the 3 outward directions.

This shape is also reflected in the floor plan of most Greek Orthodox Churches. A typical Church will have a central dome supported primarily by a square structure, but also by flanking half-domes to disperse the outward force of the main dome.

The meaning of this cross is based in the crucifix of the sacrifice. In this sense it is more like the Latin Cross than the Greek Cross, but the rounded "protrusions" signify a projection of God's grace (similar to the meaning inherent in the Maltese Cross). 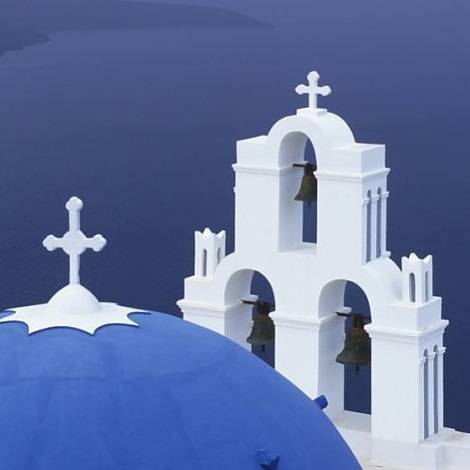 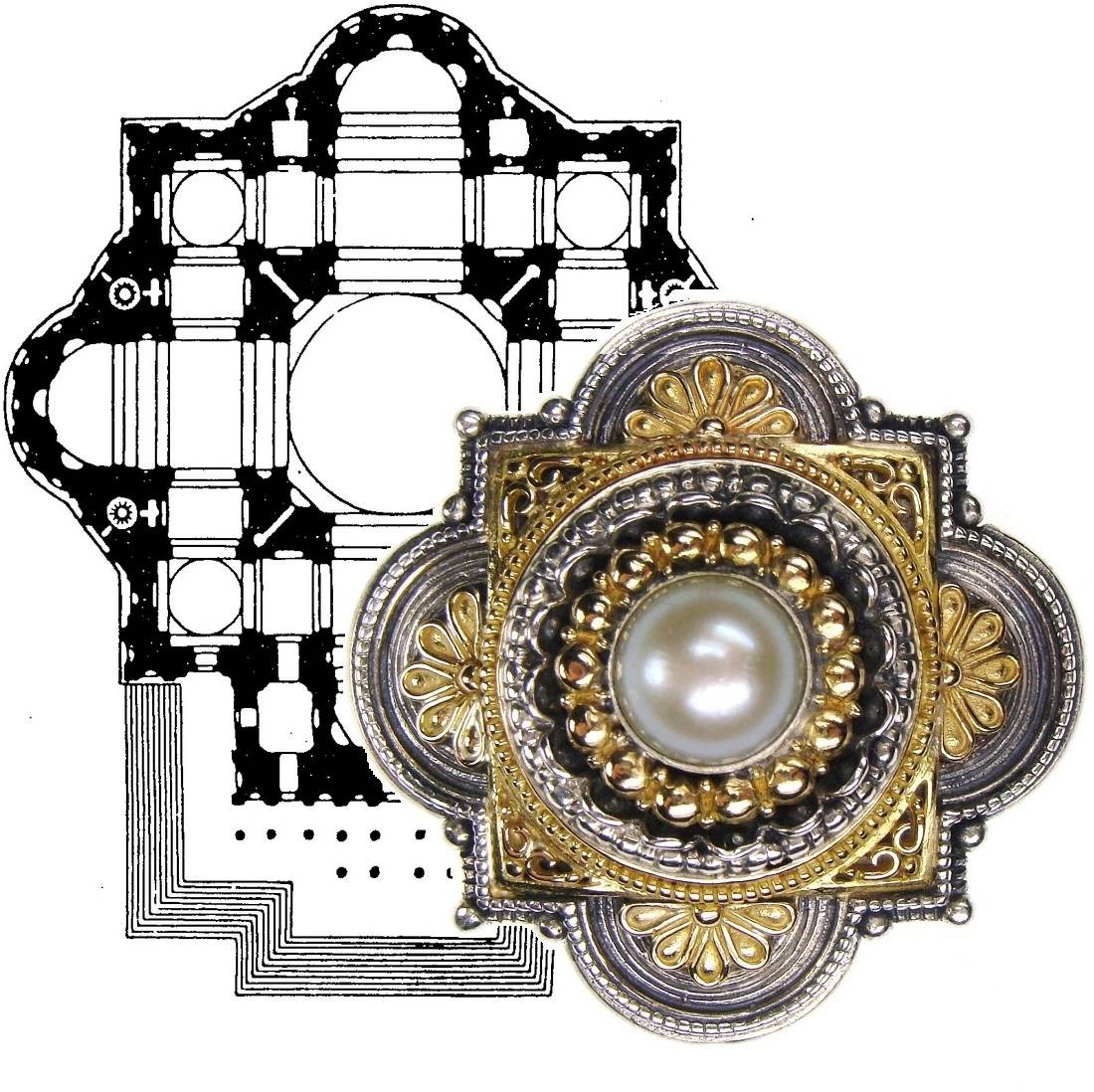 If you search our store for the term "Faith" you will discover a unique shape being described. It is essentially a square with semi-circles protruding from each side. You can see this shape in the "Faith Pendant" shown superimposed over a floor plan of a Greek Orthodox Church in the image depicted here.

A close inspection of Greek Orthodox Cross tips will reveal the repetitive use of this shape. It's important to note, however, that what we call the "faith" shape here in our store has no particular religious meaning by itself (unless associated with a cross).

What's with all the names? I thought you just called this one "the cross"?

So to explain: the latin term "crux" means "the cross", "immissa" means inserted (the Romans inserted horizontal arms into the vertical shaft to build a crucifix) and "capitata" means "with a head" (because sometimes the Romans just used a vertical post or a "T" shaped crucifix without the head). In any case, a vertical post with a cross beam situated close to (but not at) the top is what we now know as the Latin Cross ... or in colloquial terms: "The Western Cross."

This photo shows a cross in gold leaf mosaic at the Hagia Sofia in Konstantinople (Istanbul) which was founded by Konstantine the Great as the new center of the Roman Empire. 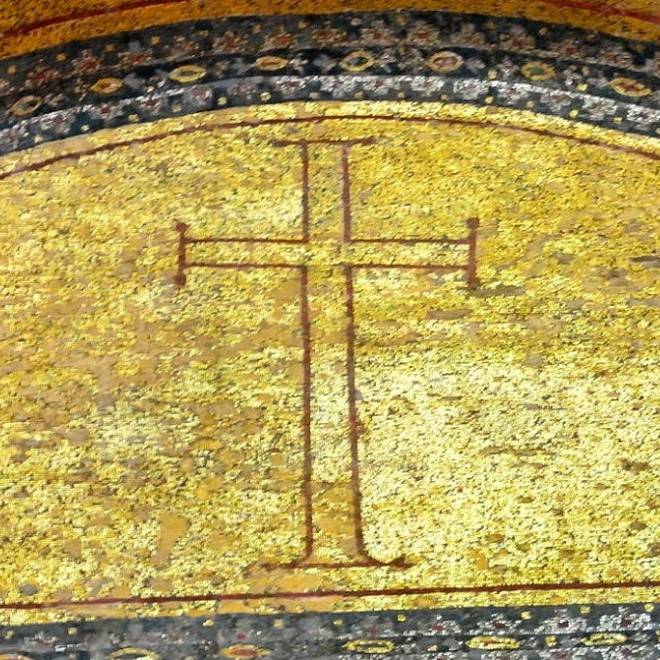 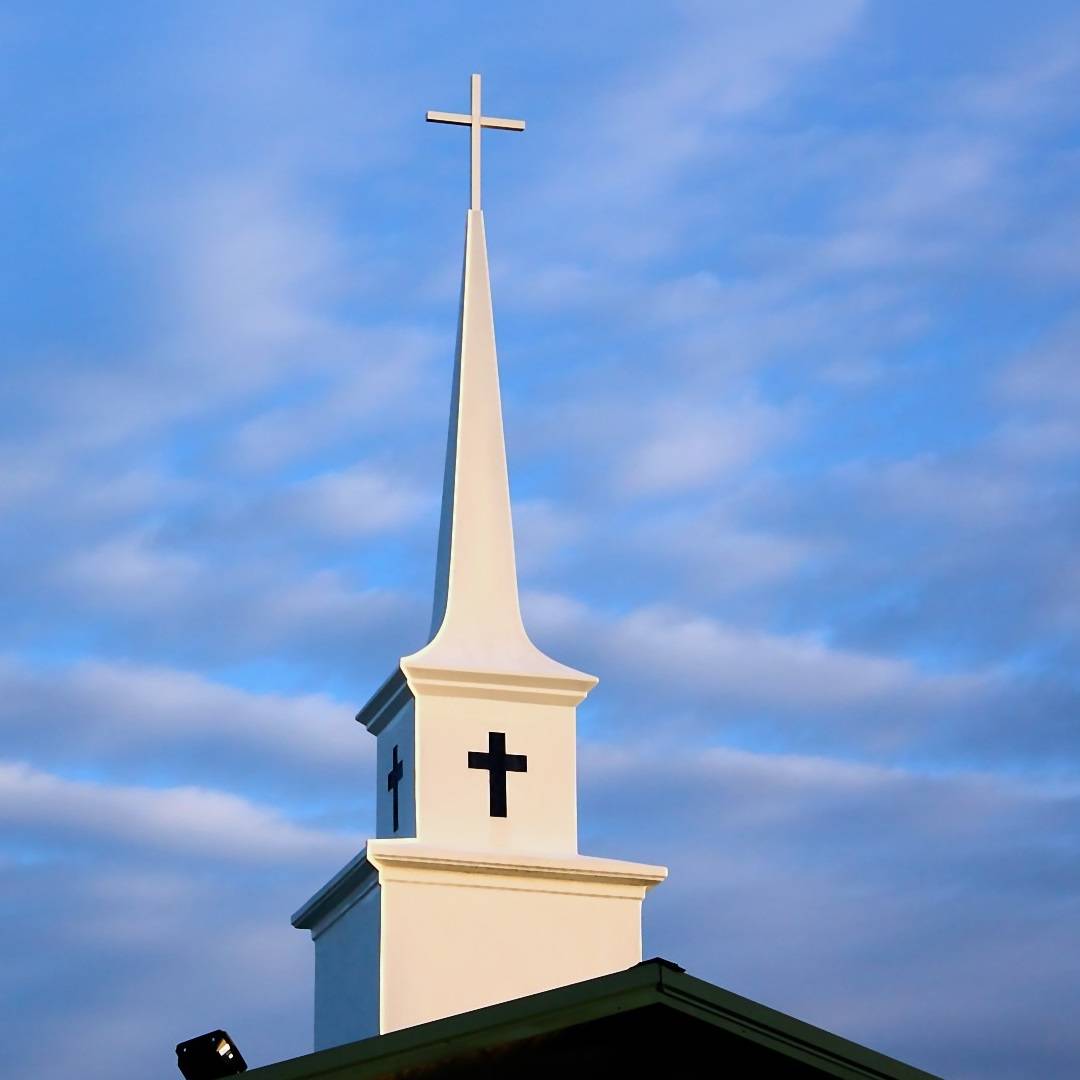 "The Latin Western Cross" is the most basic form of the cross as a depiction of the structure Jesus was crucified on. Like the Greek cross, it has been embellished over time by various Christian sects, but the closest adherence to its simplistic origins may have been generated by the reformist movements started by Martin Luther who fought against the extravagances of the Catholic Church. The simplicity of the form intended to underscore the purity of the faith and directness of relationship between man and god.

For our collection, it is the outside shape that dictates inclusion. As long as the outer edges remain straight and parallel we are calling it a Western Cross (even if it has additional decorations affixed to the face).

The Crux Pommee / The Pomme Cross

The defining attribute of the Pomme Cross is the circular terminus of each arm.

The circle was a simplification of an apple, which in turn represented the fruits and rewards of a life spent being a good Christian.

One of the earliest known examples of the Pomme Cross was on the crown headpieces of the Byzantine Emperors (pictured here are Justinian and Theodora). The Byzantines were the continuation of the Roman Empire in the East, and were located in modern day Istanbul (originally named Byzantium and then renamed Konstantinople when Emperor Konstantine chose it as his Capital). This location would play a role in the future of this particular cross design—as well as many others. 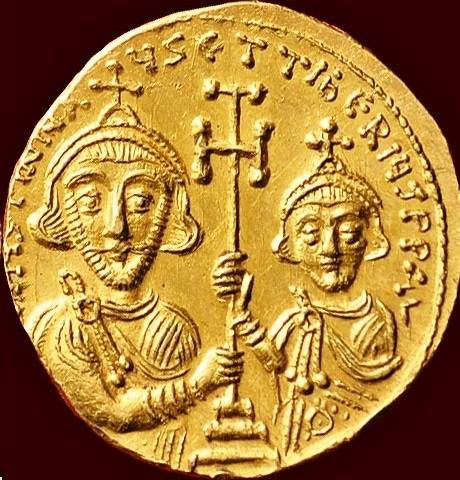 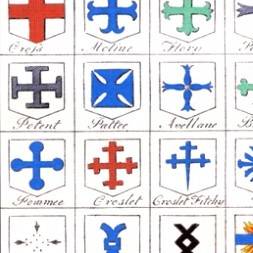 The Pomme Cross was initially found by French Crusaders on Byzants (Byzantine coins like the one pictured here) when they were traveling through the Eastern Empire on their way to the Holy Land. They brought the coins home with them and soon began using it as a heraldic symbol.

Heraldry was the system of designating symbols for knights and the military units that followed them during the medieval period—the purpose of which was to easily identify people and units on the battlefield and to bring some unity and esprit de corps to fighting units. Most of the crosses we know today were designed at this time, and for this purpose due to the need for uniqueness. Many of these crosses are still familiar to us today and can be found in national flags (the Union Jack alone has three such crosses).

The Crux Pattée / The Maltese Cross

The term "Maltese Cross" has been used to describe a great number of shapes—sometimes correctly, sometimes not. Essentially it's a Greek Cross whose central touch-point is narrower than the arms are towards their full extension.

The design etymology of the cross comes from earlier heraldic crosses of equal arm length, which in turn were derived from the Greek Cross in both form and meaning. The key difference being a more centralized point origin, leading to a more stylized presentation.

The word "Pattée" actually means "footed" (as in; the arms splay out towards the ends as an animals foot might do). "Maltese" of course refers to the island of Malta, but the form's use by people all over the world diminish any real geographic association. 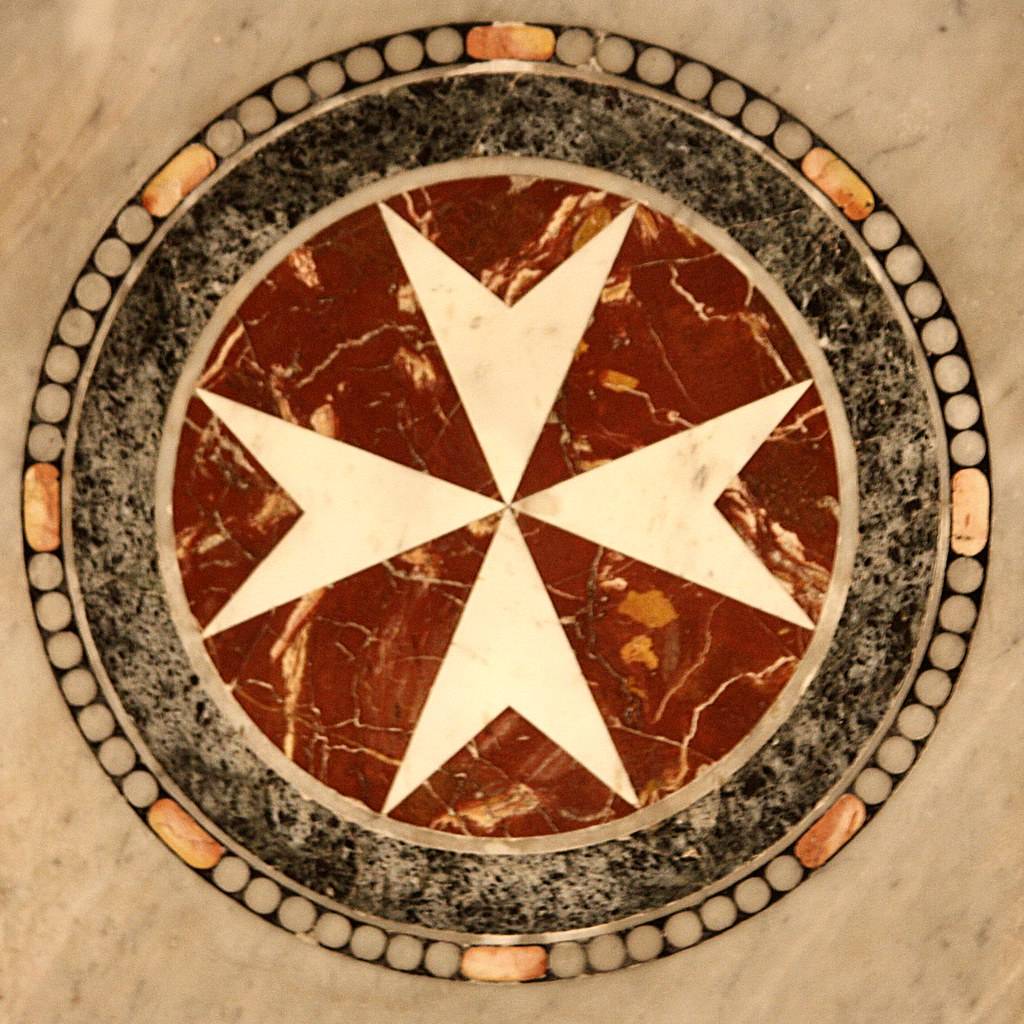 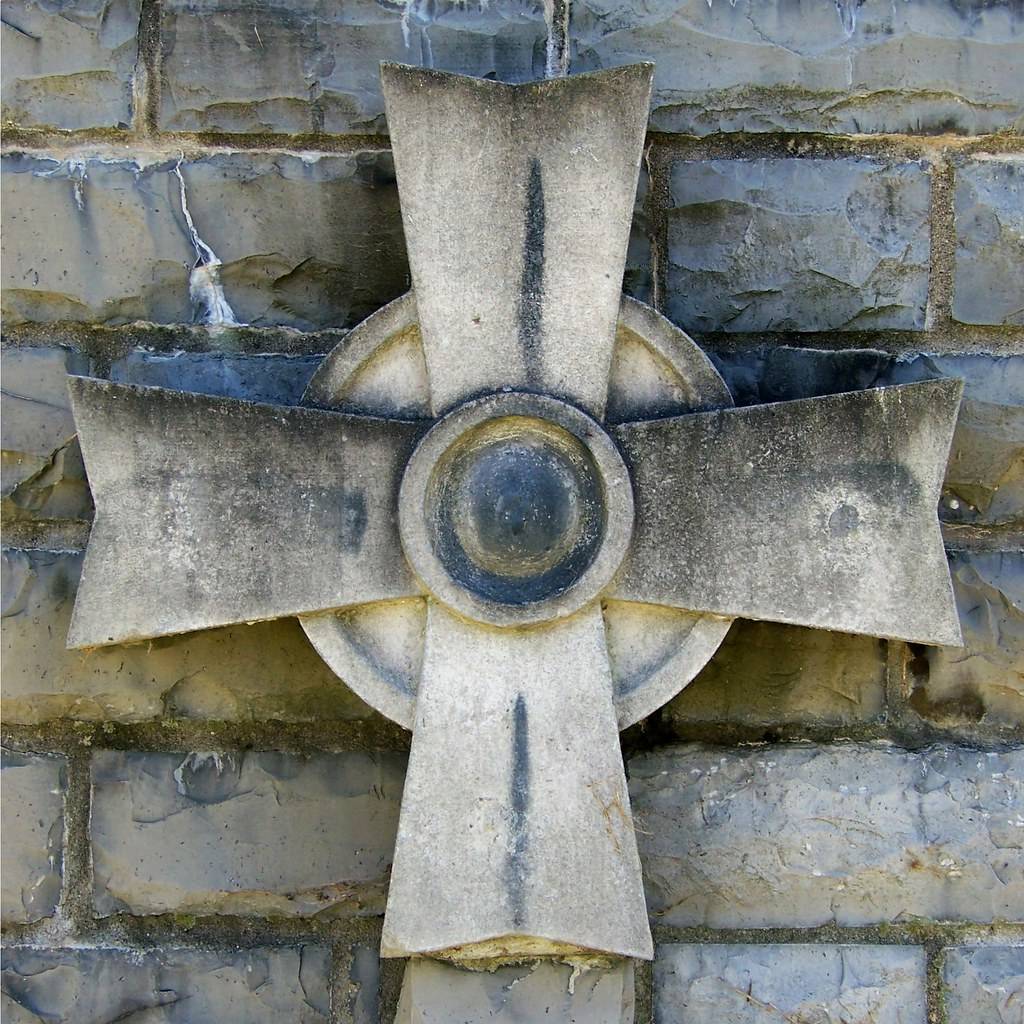 The "Maltese" cross has been used all over the world. It's been on both sides of some wars at the same time. It's the base shape of the US Naval Cross, The Victoria Cross, and the Iron Cross—all awards given by opposing sides in WWII. It has been used by hundreds of municipalities from Moscow to Spain in their heralds due to its history as a popular medieval symbol.

One bit of commonality is an association with courage. Simply looking at it might tell you why: It looks strong. Its splayed-out form depicts both protection from harm and a projection of strength.

The photo of the wall is from a WWII Canadian Army grave site near Normandy ... thanks Canada!

Added to your cart: